100% No Win, No Fee Claims
Pay Nothing if you lose, No financial risk to you

Can You Get Compensation For Being Stabbed?

If you have any questions about this guide or the legal situation relating to your own claim, please speak to one of our expert claim advisors on 0161 696 9685 today. They will get you the answers that you need, and advise you on how best to proceed with your claim. 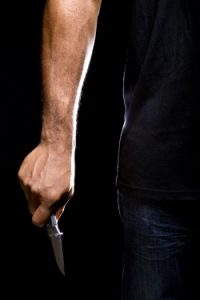 This page contains a guide to using a personal injury lawyer to process a stabbing injury claim on your behalf. It should contain all of the information you need to educate yourself about this kind of claim, and why you may be able to make one. You will find information such as:

If you have questions about this guide, or you need some general advice about your own claim, then please speak to one of our team on the contact number at the bottom of the page.

What is a stabbing? 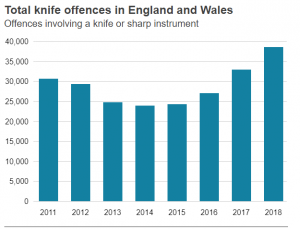 Take a look at the graph above; it shows that since 2014, the number of occurrences of knife crime in the UK has risen.

Part of the answer to the question, “can you get compensation for being stabbed?” is that you will have to be able to prove that Actual Body Harm (ABH) took place, in a criminal manner. This link explains very well what ABH is:

An explanation of ABH

The law in the UK is very strict about what knife crime is. Some kinds of knives such as switchblades (or flick knives), butterfly knives, and hidden blade knives are entirely illegal to carry. However, carrying any knife with the intent of wounding is also considered a crime in the UK. A good explanation of this law can be found via this link:

A stabbing would, therefore, be any incident involving knife-caused wounds that injure a person, whereby the third party that caused them harm has a) committed ABH, and b) broken UK knife laws. This would be a basic legal definition of what a stabbing actually is.

If you know the identity of the culprit and they have enough resources to pay compensation, you could pursue a claim against them for personal injury. If you would like to know how much you could claim for a stabbing, you could check a personal injury claims calculator that would give you a rough idea. You can also use the table below to look up specific kinds of compensation and the payment range associated with them.

If you would like a more accurate estimate, or need answers to questions such as, “how much compensation per stitch can UK solicitors claim for a client?” Then please speak to one of our claim experts on the telephone number at the top or bottom of the guide.

Compensation is paid out differently through the CICA scheme. Below, you can find a table that details some of the potential payouts for different injuries. For more information on what you can claim through the CICA, call our team of expert advisors.

Damages Your Criminal Injuries Compensation Can Include

If you have been the victim of a stabbing, and you make a successful claim for stab victim compensation, then the settlement you receive will likely be made up of several different types of damages. Above, we considered potential compensation awards for physical harm. It’s also possible to recover financial losses that have been incurred because of the injury. There are some differences in what you can recover depending on whether you pursue a personal injury claim or a claim through the CICA. Generally, you’re able to recover the following costs, though to be sure, contact one of our expert advisors for more information.

If you would like to know what types of damages you could claim in your own case, please use the telephone number near the end of this page, and one of our claims team should be able to tell you.

This is the basic procedure for dealing with a stab wound or any other kind of laceration that is bleeding heavily.

What Are The Symptoms Of Shock And What Should You Do If A Stab Victim Goes Into Shock?

When a person suffers a knife crime injury, the part of the answer to the question, “what happens to your body when you get stabbed?” is that they could go into shock. Despite the name “shock”, this medical condition has nothing to do with the psychological effects of being stabbed.

The body goes into shock when the circulatory system is struggling to provide enough oxygen to every part of the body. Generally, this will have been caused by loss of blood. Symptoms of shock include pale skin that is clammy or cold to the touch. If the victim is conscious, they may complain of thirst or a feeling of nausea. Dizziness and anxiety are also common symptoms of shock.

To help a person in shock, you should lay them down on their back, and raise their knees so that their legs are bent, forcing blood from the legs down into the body. You should cover them and keep them warm. You can find a great guide to dealing with shock, at this link:

How to deal with shock

Should I Remove The Object Or Knife From The Victims Wound?

If you were to examine pictures of stab wounds you can survive, right after the event, you would see that generally, the knife is left in place until emergency responders arrive. This is because the knife blade is at least partially blocking the cut, and preventing it from bleeding fully. The only time you would remove the knife is if it is causing an obstruction to an airway. For example, the victim has been stabbed in the neck, and the knife is blocking the throat.

Characteristics Of Stab Wounds And How They Are Assessed

When a personal injury solicitor processes a claim for compensation for stabbing, the characteristics and severity of the injury are a major consideration. Here we are looking at several things, and these include:

These considerations, and more, are used to evaluate the worth of a claim, and to decide how much compensation the victim would be awarded.

If you are the victim of a stabbing that is deemed Actual Bodily Harm (ABH) in the eyes of the law, then you could be able to claim criminal injuries compensation. When a third party causes you harm, then you will generally have a valid reason to make a compensation claim against them. However, there is a complication here. What happens if the defendant doesn’t have the financial means to pay you compensation? In this case, a different process is followed by your legal team, and we explain this in the section below.

If you are seeking criminal compensation for a stabbing and the defendant doesn’t have the financial means to pay you any compensation, then your solicitor can make a claim through the Criminal Injuries Compensation Authority (CICA). As the name suggests, this is an organisation that provides financial restitution to victims of crimes. To answer the question, “how long does CICA compensation take?” it generally takes 12 to 18 months for CICA to evaluate and make a decision on a claim.

It has been reported that a young Polish man of 25 was stabbed twice in the heart following an altercation with another passenger on a night bus. This stopped the oxygen to his brain, and the injuries that this caused were catastrophic.

The victim now has to use a wheelchair and has vastly reduced mental capacity and capability. Additionally, he has to be cared for 24 hours a day but nursing staff and his carer. The family of the victim applied to the CICA for a compensation settlement. CICA turned down this claim, as the victim had been under the influence of alcohol at the time. An appeal was made, and the victim’s family were finally awarded £250,00 for their claim for stabbing.

How Long Do Stab Victim Compensation Claims Take And Is There A Time Limit?

The table below shows the personal injury claims time limit in specific circumstances, that must be adhered to in order to be able to make a claim. There is also a time limit that applies to CICA claims, which is generally 2 years from the date of the incident. 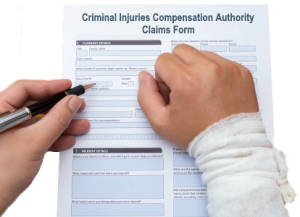 If you need to begin a personal injury claim or CICA claim for a stabbing, doing so is very straightforward. Our claims team can talk you through the process. Use the number below, and explain your situation. We will ask you some questions so that we can learn enough about your claim to offer some proper, informed advice. We will then make a recommendation on what we believe would be your best course of action, and how best to start your claim.

We operate a No Win No Fee national claims service that is available to everyone who resides within the UK. The way this service works is that you pay us nothing to start working on your claim, and you pay us nothing during the time we are processing your claim. If we don’t manage to win you any settlement, then you still pay us nothing. In fact, the only time that you do pay us is when we receive a compensation payment for you, and then we automatically take our fee out of the money received and then give you the rest. Our fee is modest and capped by law so you won’t need to worry about losing a chunk of your compensation. If you would like to know more about this service, give our claims team a call on the number below.

How Our Team Can Help Victims Of Stabbings

We can help to advise you on how best to go about making your stabbing claim, and we will do so without any legal jargon. We will always try to get you the most compensation we can and do all that we can to ensure that your claim has a successful outcome. We are just a phone call away at all times. We will keep you updated on what we have been doing for you, and on how your claim is progressing. Speak to one of our claim advisors on the number below to get your claim started today.

If you have been the victim of knife crime and have suffered a knife injury, then we can likely help you to make a compensation claim. Call 0161 696 9685 today, and explain your situation to one of our claims team, they will give you some solid legal advice on what to do next.


Advice For Victims Of Stab Injuries

We included a number of links in this guide for your information, here they are again in case you missed them in the text above:

How to deal with shock

An explanation of ABH

No Win No Fee Claims